Elon Musk does not rule out the possibility of a defeat in the context of the legal battle between him and Twitter. This week, the CEO of Tesla sold $6.9 billion worth of shares in the US electric vehicle maker, saying the funds could be used to fund a possible deal with Twitter if he loses the lawsuit against the social network. . In total, Musk has now sold $15.4 billion worth of Tesla stock since agreeing to buy Twitter earlier this year. If Musk wins the lawsuit, he can opt out of the original deal, but compensate the platform with at least $1 billion.

“In the event (which we hope is unlikely) that Twitter forces this deal through and some financial partners don’t come along, it’s important to avoid a fire sale of Tesla stock,” Musk wrote in a post. tweet Tuesday night. Twitter shares jumped 3.5% to $44.35 in early trading, but were still significantly below the $54.20 per share price Musk offered in his offer. Tesla shares were up nearly 4% at $882. The news comes as Musk previously said he would no longer sell Tesla shares.

Documents filed with the U.S. Securities and Exchange Commission (SEC) show that his transactions took place between August 5 and August 9, after Tesla’s annual meeting of shareholders, which was held on August 4. in Austin, Texas. Musk has sold $6.9 billion worth of shares in his electric car company. He averaged $869 for those shares, significantly higher than the $628 Tesla stock was worth at the end of May. The stock had hit its 2022 high of $1,145 on April 4, the day after Musk revealed he had purchased 9.2% of Twitter’s outstanding shares. 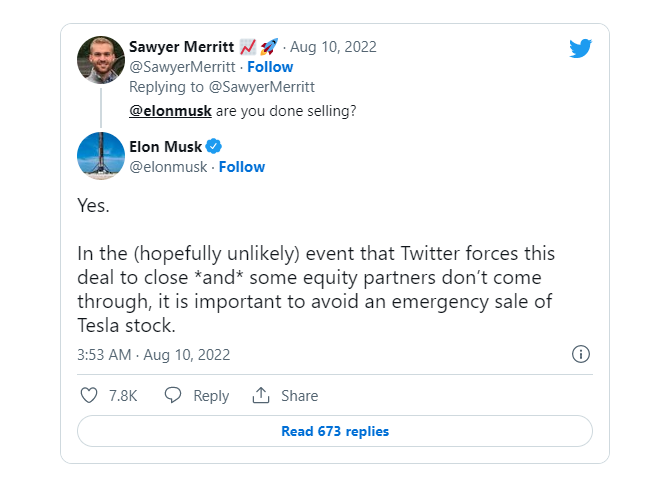 The last sales of Tesla shares made by the billionaire date back to the end of April. At the time, documents filed with the SEC revealed that Musk had sold a block of Tesla stock worth about $8.4 billion. Analysts say by selling Tesla shares now, as the stock has rebounded from its May nadir, Musk is avoiding an emergency sell-off in the automaker’s shares – possibly at a lower price. Although there are other financial partners, the share of the sale price that Musk is personally responsible for could amount to more than $33 billion.

On July 8, Musk announced on Twitter that he was terminating the deal. He accused Twitter of not giving him all the information it needed to make the acquisition, and of underestimating the number of bots, spam and fake accounts on its platform. Twitter was not happy and took legal action to ensure Musk’s deal went through at the promised price, which would be a boon for many of its shareholders. As the trial, scheduled for October, approaches, although Musk is trying to push it back to 2023, he is apparently preparing for the worst-case scenario of being forced into the deal.

As Twitter stated in its complaint, “the other terms offered and agreed to by Musk were, as he put it, ‘seller friendly.’ The complaint also states that there is no funding condition. nor condition of diligence”. The transaction is supported by tight debt and equity commitments. Musk has personally pledged $33.5 billion. Furthermore, although a $1 billion severance fee is included in the purchase agreement, it takes more than deep regret on Musk’s part to back out of the deal.

Or, there must be a material adverse event at Twitter or it must be established that Musk was materially deceived about the activities of the social media platform. Musk takes the second route, arguing that Twitter is so infested with spam bots that its financiers cannot accurately assess Twitter’s business prospects. While Musk has said he will no longer sell Tesla stock, he is nowhere near the $33.5 billion figure. Additionally, some sources report that Musk is worried that some of the deal’s financial partners will drop him before the trial.

And these latest sales bring the total Tesla shares sold by Musk to around $32 billion in less than a year. Finally, on Tuesday, he said he would buy back some of his shares if he didn’t go through with the acquisition of Twitter. He also hinted that if the Twitter acquisition doesn’t go ahead, he will consider creating his own social platform, X.com.

What do you think of Musk’s sales of Tesla shares?

Do these sales reveal that his chances of winning the lawsuit are slim?

Do you think US justice will force Musk to buy Twitter?

Elon Musk in turn files a complaint against Twitter for not having to buy the company, one of the arguments put forward would be that Twitter lied about its number of redeemable users

Twitter misses analysts’ earnings expectations and blames Elon Musk for its revenue drop, as well as a weaker ad market

Elon Musk gives up buying Twitter, citing breach of contractual obligations, Twitter would not have provided him with all the information requested on the number of spam accounts